Indian heritage and culture are vivid because of the large number of religious groups residing in our country. Every community has its own set of customs and traditions which it passes on to its younger generation. From ancient times, travelers from various regions and cultures began to visit parts of India. To them, India was a land of wonders. India is well known due to its Indian culture, wealth, religions, philosophies, art, architecture, as well as its educational practices that had spread far and wide.  From man-made marvels to natural wonders, the country has various heritage sites that should be at the top of every traveler’s bucket list. 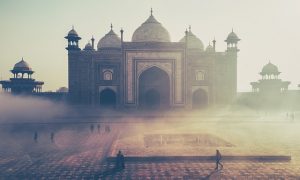 The Taj Mahal is one of the seven wonders of the world and it is located in Uttar Pradesh. It is said that the Mahal is the jewel of Muslim art in India and one of the universally admired masterpieces of the world’s heritage It was built by Mughal Emperor Shah Jahan for his beloved and late wife Mumtaz Mahal. It brought together all architectural forms developed by Mughals. The chief glory of the Taj is the massive dome and the four slender minarets linking the platform of the main building. The delicate marble screens add effect. The building gains an aesthetic touch that is placed in the midst of the garden.

The Great Stupa at Sanchi is situated in Madhya Pradesh and is one of the remote stone structures in India. It was originally built by the Mauryan emperor Ashoka in the 3rd century BC. It is one of the preserved group of Buddhist monuments. The Stupa consists of the hemispherical brick structure which is built over the relics of the Great Buddha. The Stupa has four gateways each stands for love, peace, courage, and trust. It is widely considered as the icon for Buddhism and its rich culture. The stupa has a large number of Brahmi engravings.

Ellora Caves is situated in the golden city of historical monuments Aurangabad, Maharashtra.  It is architecture out of one big rock which was cut into temple caves which depict the Buddhist, Hindu, and Jain monuments. It includes 17 Hindu caves, 12 Buddhist and five Jain caves which indicates the mythology of each religion. The Grushneshwar temple near Ellora caves is also one of the major attractions as it is the temple of Lord Shiva and it also has its sculptures craved from the ancient monasteries which depict Hindu epics. 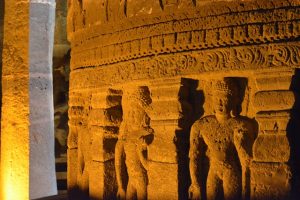 Along with the Ellora Caves, another attraction from the golden city of archaeological forts is Ajanta Caves which is situated in Aurangabad. The caves indicate marvelous paintings which depicted the past lives and rebirths of the Buddha, pictorial tales from Aryasura’sJatakamala, and also rock-cut sculptures of Buddhist gods. Also, in Ajanta caves, one can find 30 rock-cut monuments, paintings, sculptures and much more. These caves contain some of the best Buddhist art pieces found anywhere in the world. The Ajanta Caves includes ancient monasteries and worship-halls of different Buddhist traditions carved into a 75-meter (246 ft) wall of rock.

The Red Fort as the name initially indicates that it is architecture built in red sandstone and this great monument is in New Delhi district. The fort became the political capital of the Mughals. The fort was built by fifth Mughal Emperor Shahjahan. The perfect masterpiece of Mughal architecture which includes Hindu, Islamic and Persian style. The fort consists of several other buildings as private canopy the Diwan-i-aam, the Diwan-i-Khas. 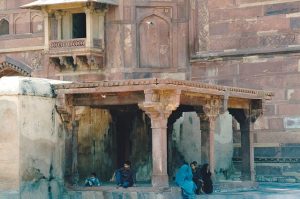 Fatehpur Sikri also is known as City of victory was built during the Mughal period and is situated in Agra. It was created when the first Mughal Emperor Akbar decided to shift his capital for a better hold over the region. This architecture is an excellent blending of Persian (half dome portal), central Asian(glazed blue tiles which are used for decorations) and also various Indian styles(square bracket entrances). The mosques and the BulundDarwaza, these were built to commemorate Akbar’s victory. 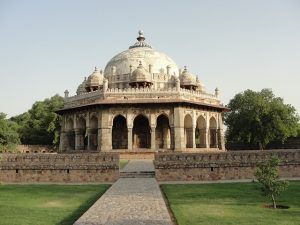 The Humayun’s Tomb was built by Hamida Banu Begum, the first wife of Humayun and it is situated in Delhi. It was the first garden-tomb of that era. The architectural modernizations for which Humayun’s Tomb is renowned for included Mughal architecture, tomb, water channel, bath, and pavilion. The tomb is of cultural significance as it was the first garden-tomb on the Indian subcontinent. 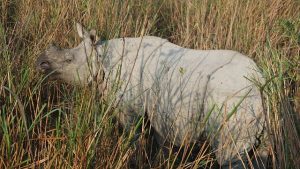 Kaziranga National Park is a true satisfaction for the ones who are fond of nature and wildlife. It is located in the beautiful city of scenic beauty Assam. It is one of the biodiversity hotspots. Kaziranga is home to the endangered Indian one-horned rhinoceros, the state animal of Assam. It is also a habitat for numerous other 15 threatened species, including the white-winged wood duck or Dao Hanh, the state bird, Bengal florican, black-breasted parrotbill, Bengal tiger, Asian elephant, pygmy hog, wild water buffalo, Indian hog deer, golden langur, Ganges river dolphin, capped langur, hoolock gibbon, tiger, leopard, sloth bear, wild boar, water buffalo, gaur, sambar, swamp deer, and Indian muntjac. 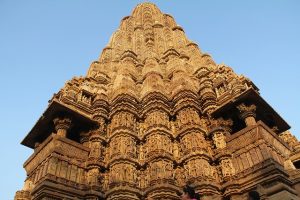 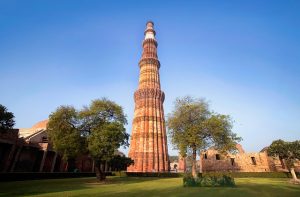 Qutub Minar was constructed by Qutab-Ud-Din Aibak as a victory tower to celebrate the triumph of Mohd. Ghori and its construction were completed by Qutub-Ud-Din Aibak’s successors. It was constructed to commemorate of Muslim dominance over the last Delhi’s Hindu ruler. Being the tallest monument in Delhi and the second tallest pillar in India, it is one of the remarkable monuments constructed. The pillar is 73 m-high tower which consists of five stories, among which the first three stories are constructed from red sandstone and remaining both are of marble and sandstone. The portions of Minar embrace Arabic and Persian inscriptions and Kufic calligraphy which tell the mythology of its construction.

Sun Temple is well known as Black Pagoda and it is situated in Odisha. The Konark Sun Temple is the Hindu temple devoted to the Sun God built in the 13th century. The architecture carved in this temple is of Kalinga style. This heritage site is famous for the large sculpture that indicates the chariot of the sun. The temple is said to exemplify the passage of time, which is said to be owned by Sun God as per mythology. The temple has 24 wheels that illuminate symbolic designs and it is led by a team of six horses. Each horse indicates the six Brahmin sanctuaries located in the country.

Jantar Mantar was established by Maharaja Jai Singh and it is situated in Jaipur. It was made in the early 18th-century key purpose of this establishment was to gather astronomical tables, and to figure the times and movements of heavenly bodies like the sun, moon and other planets. The large instruments in Jantar Mantar are created with sandstone and plaster of Paris for calculating astronomical values.

Hampi also goes by the name Group of Monuments is situated in Karnataka. From the beautiful carved Dravidian architecture to temples such as Achyutaraya, Vitthala, Narasimha and – perhaps the greatest of them all – Virupaksha, the Hampi Group of Monuments is one of the best heritage sites to be visited. There are also six Jain temples and monuments and a Muslim mosque and tomb. The temples located in this place is one of the mandatory pilgrimage sites.

Bodh Gaya is one of the crucial Buddhist religious sites. It is a place of pilgrimage joined with the Mahabodhi Temple which was built by Emperor Ashoka and it is located in Bihar. It is famous as it is the place where Gautama Buddha is said to have attained enlightenment while meditating under what became famous as the Bodhi Tree. Since the past era, Bodh Gaya has remained the important place of pilgrimage for both Hindus and Buddhists. The temple complex holds the temple and six other important sites indicating to the enlightenment of Buddha. 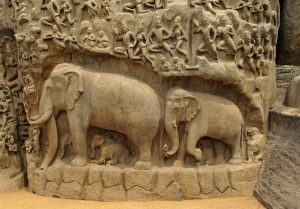 Mahabalipuram or Mamallapuram is a historic city and it is located in the Tamil Nadu district. These monuments were constructed during the Pallava dynasty also known as the Seven Pagodas The site has 40 ancient monuments and Hindu temples, including one of the largest open-air rock reliefs in the world. The group includes various categories of monuments: ratha temples with single processional chariots, mandapa vihara with the Mahabharata and Shaivic, Shakti and Vaishna inscriptions in a number of Indian languages and scripts; rock reliefs,stone-cut temples and archaeological excavations dated to the 6th century and earlier. The architecture of the rock-cut temples, mainly the rathas, became a design for south Indian temples. Architectural features, mainly the sculptures, were extensively adopted in South Indian, Cambodian temples. 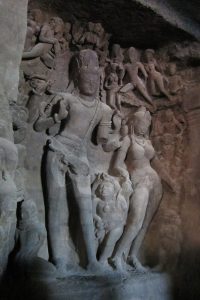 Elephanta Caves is a collection of cave temples mainly devoted to the Hindu god Shiva and it is situated in the City of dreams Mumbai. The caves comprise of five Hindu caves and a few Buddhist stupa mounds that belongs to the 2nd century BC, as well as a small group of two Buddhist caves with water tanks.

The carvings depict Hindu mythologies, with the large single 20 feet Trimurti Sadashiva (three-faced Shiva), Nataraja (Lord of dance) and Yogishvara (Lord of Yoga). The Elephanta Caves contain rock cut stone sculptures that display synchronization of Hindu and Buddhist ideas and iconography. The caves are carved from solid basalt rock. There are 7 caves in total which are dedicated to Lord Shiva. They were made in the period between the 7th and 12th centuries AD. 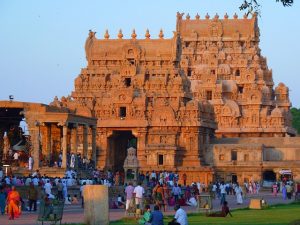 Brihadishvara Temple, also known as Rajarajesvaram is a Hindu temple dedicated to Shiva and it is situated in Tamil Nadu, India. It was built by Raja Raja Cholas. Under the Cholas, Dravida style of architecture attained the most magnificent form and Brihadeshwar is the perfect example of this style. It is one of the largest South Indian temples. The giant statue of Gomteshwar at ShravanaBelagola is an example of the attained standards in sculpture. The Nataraja, Dancing figure of Shiva is considered a masterpiece.

Rani ki vav also called Queen’s stepwell is located in the town of Patan in Gujarat state. The stepwell indicates the adoration of ancient Indians for water as an important natural resource. The stepwell is divided into seven levels of stairs with sculptural panels, which leads to the deep circular well. The height of craftsmen’s ability in stepwell construction is indicated by this ancient system. It is classified as a Nanda-type stepwell. The niches on the side walls are ornamented with beautiful and delicate figures and sculptures. There are 212 pillars in the stepwell. There are geometric lattice patterns and designs resembling designs of the local textile tradition of Patola. Animal figures of horses, elephants, and lions are used for decoration of pillars and basement moldings. 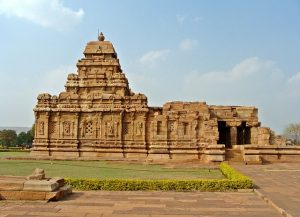 Pattadakal is known for the set of Chalukya architecture and is located in the Karnataka state. It is said to have a harmonious blend of architectural forms from northern and southern India. The Hindu temples are generally dedicated to Shiva, but elements of Vaishnavism and Shaktism are also featured in this monumental structure. The carvings depict the mythological stories from the Ramayana, the Mahabharata, the Bhagavata Purana, as well as elements of other Hindu texts, such as the Panchatantra. This was previously called Kisuvolal, which translates to the red soil valley.

Nalanda University was one of the first universities in the world and it is located in the city of Bihar. It was established in the 5th Century BC, and also it is inspected by the Buddha during his lifetime. Ancient studies depict that the University of Nalanda was established during the reign of the Gupta emperor Kumaragupta.  It includes the remains of a monastic and scholastic institution dating from the 3rd century BC to the 13th century CE.

The Sundarbans National Park is located in the Sundarbans delta in Bengal. It has become a biosphere reserve. This area is covered by mangrove forests. It contains one of the largest preserves of the Bengal tiger. It is also home to various species of bird, reptile and invertebrate species, including the salt-water crocodile. There are seven main rivers and many watercourses forming a network of channels at this delta. The coastal area has many mudflats. They are the right environment for mangroves.